The Young and the Restless (YR) Spoilers: Ashley Stops Victoria – Ravi Reinformed and Given Go-ahead 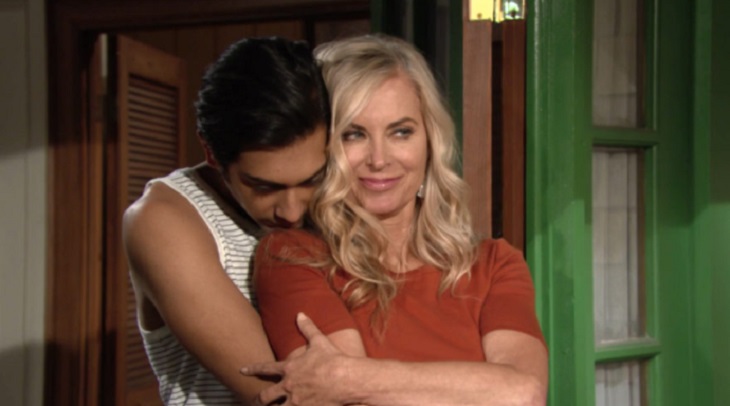 Ashley (Eileen Davidson) made the right decision by not allowing Ravi (Abhi Sinha) to leave Jabot on ‘The Young and the Restless’. He had been feeling increasingly conflicted and made an impulsive move by accepting Vickie’s (Amelia Heinle) offer to jump to Newman Enterprises. But all was nicely reversed when Mr. Shapur’s personal and business interests were affirmed by the woman he loves.

‘Rashley’ is easily one of Y&R’s most heart-warming couples. An unlikely pairing that slowly formed in a storyline that’s been well-written by two back office teams.

Ashley eventually accepted Ravi’s personal pitch. She’s with someone who fully respects and admires her. Ravi benefits by being with a strong woman whose essence he adores, rather than takes for granted as so many type A personality types have done through the years.

It was understandable that Ravi felt uneasy at Jabot, as Ashley’s fights with her brother have increasingly become untenable. Plus, Miss Abbott compensated for said stress by appearing to use her boyfriend on a number of occasions for a reason that didn’t link to romance, though that may have only been Ravi’s perception.

Sinha’s character remains a sensitive soul, though he is maturing. Ashley’s response to Vickie’s attempt to poach Jabot’s top techie was encouraging. It confirmed that she does recognize Ravi’s relationship experience level. His naivete in that part of his life drove the acceptance of Vickie’s sweet business offer.

Compare Ashley’s handling of that matter to the disagreements she’s had with Jack (Peter Bergman) about Dina (Marla Adams), or the bitter verbal battles they’ve had about their father’s business. The difference being that Ravi brings no history baggage to the table.

Yes, there is an age-gap. Those who are sensitive themselves quickly dismissed that point months ago. That assumptive stance pushed emotion over logic.

It’s not that every observer who voiced age-related concerns believe Ashley and Ravi couldn’t, or can’t make it. Instead, seasoned minds suspected the now-realized potential for this pair’s backstories to create misunderstandings. Thankfully, barriers didn’t result as well. Since they haven’t, ‘Rashley’ has strengthened itself and appears primed to develop further through Christmas and into the new year.

Days Of Our Lives News: Arianne Zucker Returns To DOOL