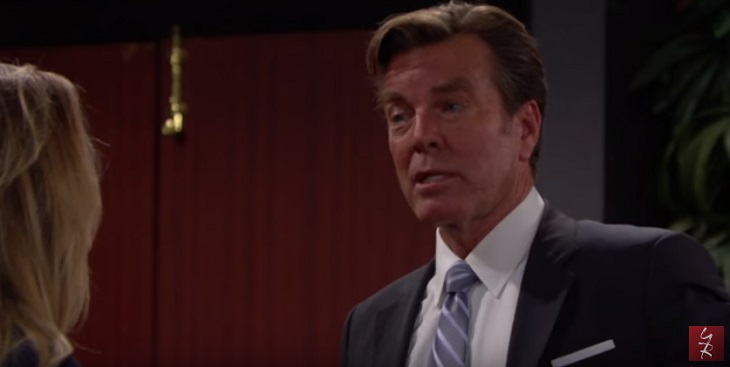 “The Young and the Restless” spoilers for Wednesday, July 26, tease that Jack (Peter Bergman) will ask Dina (Marla Adams) to have dinner with him. In his office, Jack makes the request over the phone and Dina tries to recall what else she might have planned. She eventually determines that she’s free. When Jack meets up with Ashley (Eileen Davidson), he fills her in and she agrees to come along.

At the elevator, Phyllis (Gina Tognoni) spots an unconscious Victoria (Amelia Heinle) and rushes to her side. Once Victoria regains consciousness, she contends that she simply needs to eat. She makes Phyllis promise that she won’t tell anyone about her collapse. Phyllis spills the news to Jack later, but points out that he can’t tell anyone. Jack needles Phyllis by hinting that Victoria could be pregnant.

WATCH: The Young and The Restless Preview Video Wednesday July 26

Victoria heads back to Brash and Sassy. She tells Billy (Jason Thompson) about her fierce faceoff with Jack and adds that she just fainted. Billy is worried, but Victoria brushes the whole thing off. She says she’s going get herself checked out, which seems to appease Billy. Victoria is grateful that Billy cares about her. She pulls him in for a hug.

At the athletic club, Graham (Max Shippee) joins the dinner party as a favor to Dina. Once Ashley and Jack arrive, they all sit down for their meal. Dina can recall playing a game with Jack at the Abbott cabin. She can also remember the names of the Kardashians. However, she struggles to recall the wine they just requested.

Once the evening winds down, Ashley tells Ravi (Abhi Sinha) that Dina might be depressed. At the television studio, Jordan (Darnell Kirkwood) rants about the problems Cane (Daniel Goddard) caused for Lily (Christel Khalil). Talk turns to the show and he praises Hilary (Mishael Morgan) for the work she’s been doing. They feel like they can keep the momentum going.

At home, Cane gripes about Victoria costing him the job at Jabot. He’s concerned about not being able to find a new position, but Lily thinks something will pop up. In the meantime, she calls her agent and asks him to set up some auditions. He has a good opportunity, but she needs to send her tape in ASAP. Lily calls Jordan and he suggests that Hilary will let her use the studio.

At the pool bar, Charlie (Noah Alexander Gerry) moves Juliet’s (Laur Allen) lounge chair for her. He also hands her a towel and she’s thankful. Cane watches their interaction nearby. Once Charlie walks away, Cane confronts Juliet about her game. She insists she had no clue that Charlie was Cane’s son, but hopes their child turns out like that. 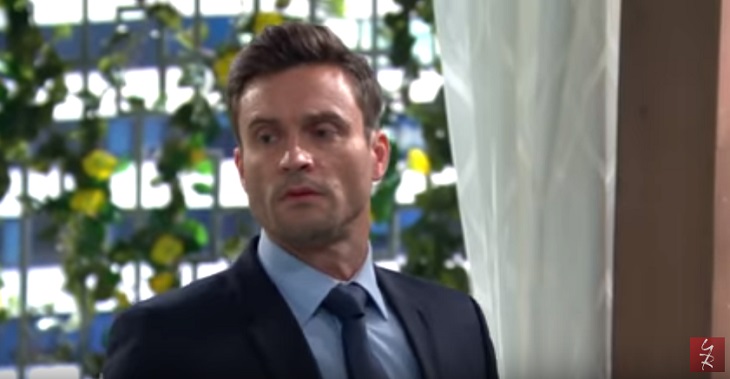 The Young And The Restless Spoilers: Will Cane’s Decision To Target Billy Cost Him His Marriage?

Cane continues to blast Juliet, but she pushes for friendship. When Cane states that Victoria ruined his shot at Jabot, Juliet argues that he should retaliate. Back at the TV studio, Hilary and Lily make an effort to keep the peace. Jordan tapes Lily doing a fun and flirty commercial. When she’s done, Hilary reads the script and makes her own tape.

At Brash and Sassy, Cane storms in and shouts at Victoria for sabotaging him. Elsewhere, Phyllis finds a distracted Billy. She realizes he knows about Victoria’s collapse. When Phyllis mentions hanging out with the children again, Billy is hesitant. He contends that it was rude of him to invite Phyllis into Victoria’s home.

Phyllis looks nervous as Billy promises to meet up with her a little later. How far will Phyllis go to keep Billy in her life? “The Young and the Restless” fans will want to stay tuned! We’ll give you updates as other Y&R details and rumors emerge. Stick with the CBS soap to see what’s ahead in Genoa City.

WATCH: The Bold and The Beautiful Preview Video Wednesday July 26

The Bold and the Beautiful POLL: Does Quinn Need to Resort to Her Crazy Ways to Get Eric Back from Psycho Sheila – VOTE