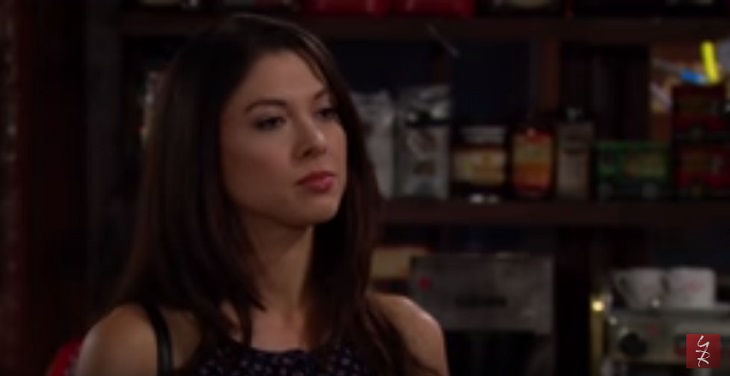 “The Young and the Restless” spoilers for Wednesday, August 2, tease that Lily (Christel Khalil) will be at the end of her rope. At home, Lily learns Cane (Daniel Goddard) lied to her once again. Billy (Jason Thompson) and Victoria (Amelia Heinle) explain what happened with Jesse (Max Adler). When Lily rips into Cane, he insists that he didn’t want to lose her.

Lily snaps at Cane for using the same old excuse. She tells him to pack his bags and leave the house tonight. Cane protests, but Lily’s mind is made up. At the athletic club, Phyllis (Gina Tognoni) and Lauren (Tracey E. Bregman) discuss business. Talk turns to the long days Billy is putting in at Brash and Sassy. Phyllis is getting fed up with all the time Billy spends with Victoria.

When Victoria and Billy walk in, Phyllis watches them in the distance. She eventually meets up with them and Billy suggests they could give Victoria a ride. Victoria contends that Billy is just fussing over her again.

At the coffeehouse, Reed (Tristan Lake Leabu) and Charlie (Noah Alexander Gerry) manage to make peace for now. When Charlie spots a familiar face from the pool bar, he starts chatting with her. Reed gets Mattie’s attention and notes that Charlie is speaking to Juliet (Laur Allen). He wonders what’s up.

Mattie and Reed march over to explain who Charlie’s talking to. They point out that this is the woman who sued Victoria and got pregnant by Cane. Charlie, Reed and Mattie all voice their complaints. Juliet assures them that she’s sorry for any pain she caused.

Nearby, Sharon (Sharon Case) begs Paul (Doug Davidson) to help her find Crystal (Morgan Obenreder) tonight. Paul agrees to pitch in and Scott (Daniel Hall) wants to do what he can as well. He offers to write a piece to raise awareness. Paul takes a moment to chat with Lauren later. He assumes she’s still not on board with Sharon and Scott’s romance.

Paul playfully calls Lauren out on being an overbearing mom. He thinks she should give Sharon a chance, so she decides to try. Afterward, Sharon gives Lauren a plate of brownies as a peace offering. Lauren suggests Sharon should come over for dinner soon. Once Lauren is gone, Sharon and Scott agree that this is a positive development.

At the pool bar, Abby (Melissa Ordway) and Zack (Ryan Ashton) push each other to open up about their families. Zack has to rush off when he suddenly gets a call. Victoria mopes by and Abby asks what’s bothering her. When Victoria admits her company is stuck in turmoil, Abby comforts her sister.

At their apartment, Phyllis hears the latest Cane news and urges Billy to put work drama on the backburner. Billy insists that he can’t relax about Brash and Sassy until things turn around. Across town, Mattie and Charlie find Cane preparing to leave home. He reveals that a separation is what’s best for their family right now.

The twins understand and want Lily to have the space she needs. Cane gets emotional as he exits with his luggage. He promises he’ll always love Lily before breaking down outside. Charlie and Mattie console their mother as they all deal with the crisis.

It sounds like some tough moments are ahead for this troubled family. We’ll give you updates as other “Young and the Restless” details and rumors emerge. Stick with Y&R to see what’s ahead on the CBS soap.

Check back with Soap Opera Spy for more Y&R spoilers and news.