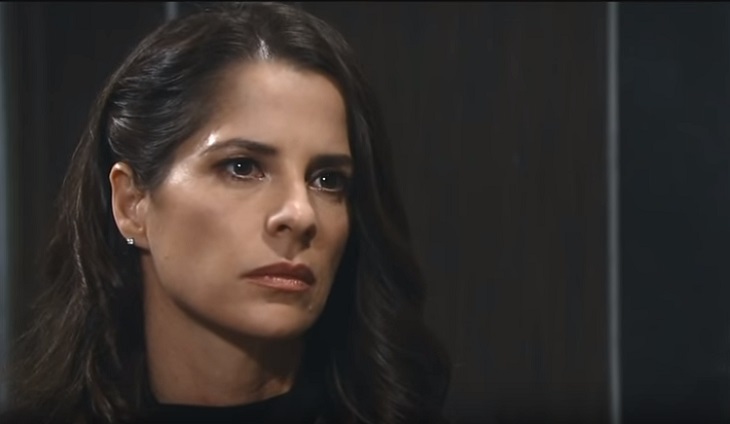 General Hospital (GH) spoilers for Tuesday, December 19, 2017 show a mother tries to protect her daughter while others have heartbreaking news.  Some are thankful for support while another offers good news.  Brothers come face to face as the woman they love wonders what is happening.  Tuesday’s episode is one GH fans will not want to miss!

General Hospital spoilers reveal Dr. Liesl Obrecht (Kathleen Gati) visits her daughter, Dr. Britt Westbourne (Kelly Thiebaud) at the PCPD and issues her a dire warning; ordering her to not even think of betraying her father, Cesar Faison (Anders Hove).  Will Dr. O be willing to harm her own child in order to protect the man she loves?

Meanwhile, Kiki Jerome (Hayley Erin) informs Dr. Griffin Munro (Matt Cohen) that she is devastated that Dillon Quartermaine (Robert Palmer Watkins) will not be coming home for Christmas.  Aunt Stella Henry (Vernee Watson) meets with her nephew Curtis Ashford (Donnell Turner) at Kelly’s and shocks him when she tells him that they may be “forced out.”

General Hospital sources show Police Commissioner Jordan Ashford (Vinessa Antoine) visiting Ava Jerome (Maura West) at her new art gallery, where Ava acknowledges that Jordan had been a great friend to her when she needed one; could Ava have something up her sleeve, or does Jordan need Ava’s help this time?

Julian Jerome (William deVry) runs into ex-wife, Alexis Davis (Nancy Lee Grahn) in the park, and tells her if she hadn’t ran away so quickly before, he would have told her the good news.  What could Julian possibly share with Alexis that she would consider to be good news?

General Hospital spoilers reveal that Jason Morgan (Steve Burton) goes to see his brother, Drew Cain (Billy Miller) at the penthouse after he learns from Anna Devane (Finola Hughes) that the thumb drive with Drew’s memories is missing.  Sam (Kelly Monaco) returns home to find them both there and demands to know what is going on.  Will they reveal to her what has happened and how will she react to the news?

Be sure to tune into ABC’s General Hospital (GH) on Tuesday, December 19, 2017 to catch up on all these stories and so much more.  Check Soap Opera Spy often for updates, news, rumors and spoilers!