General Hospital spoilers tease that Monday’s August 14 episode of the ABC soap opera will be action-packed and GH fans will not want to miss a single second of all the excitement and drama going down in Port Charles!

General Hospital spoilers tease that Sam Morgan [Kelly Monaco] might just wind up paying for Sonny Corinthos’ [Maurice Benard] shooting after all.  The PCPD was originally going to close the case, and let Garvey take the wrap, but Sam wants to do the right thing.  In the General Hospital preview for Monday’s episode of the ABC soap, Sam announces from her hospital bed that it’s “important to tell the truth.”

Meanwhile, Sonny may be willing to let what to happened to him go with Sam, unfortunately his sons do share the same sentiment.  General Hospital spoilers tease that both Michael Corinthos [Chad Duell] and detective Dante are determined to get to the bottom of it.  On Monday’s episode Michael will continue to urge his father to tell the truth about who shot him.  Back at the police station, Dante and Nathan [Ryan Paevey] will be busy piecing together the evidence and determining what gun was used to fire the bullet.

While Michael and Dante are determined to get justice for their father, Jason Morgan is on a mission of his own to keep Sam Morgan out of prison.  GH spoilers indicate that he shows up on Julian’s doorstep and announces they need to talk.  Will he try to get Julian to take the fall for Sam since he encouraged her to go after Sonny? 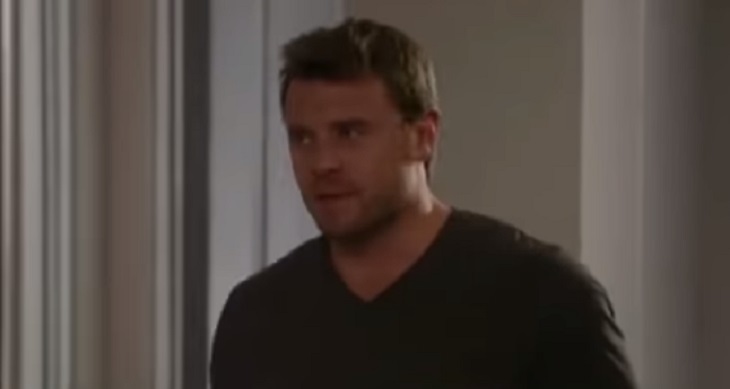 General Hospital spoilers also indicate that Sam Morgan isn’t the only PC resident who should be watching over her back, Dr. Obrecht [Kathleen Gati] is determined to take down Hamilton Finn [Michael Easton] by any means necessary, and she will amp up her agenda on August 14.  In the all new promo video she is seen sneering to Hayden’s ex hubby that Finn is her target.  Yikes!

Meanwhile across town there appears to be some drama brewing at the Quartermaine mansion.  Monica Quartermaine puts her foot down and announces she will be the one who decides who stays and who goes at the mansion!