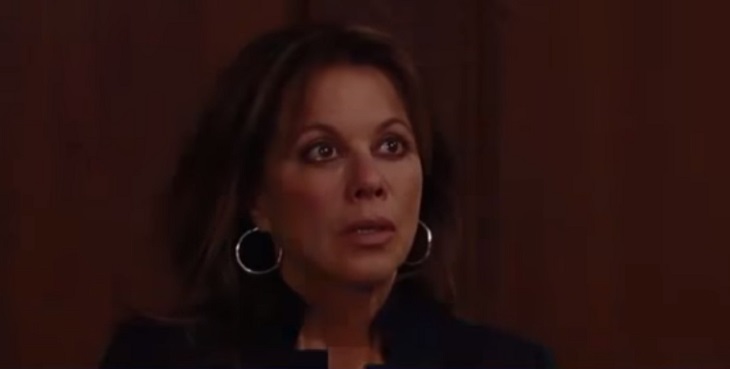 General Hospital (GH) spoilers for Friday, August 25 reveal Julian Jerome’s (William deVry) verdict comes in, and it’s a shocker. Nina (Michelle Stafford) tells Valentin (James Patrick Stuart) to meet her for dinner, and she will give his answer. It looks like a Nina and Valentin reunion is coming. Dillon (Robert Palmer Watkins) tells Kiki (Hayley Erin) that Nina wants him to fly to Morocco and it looked like he agreed to go.

Michael (Chad Duell) puts Ned (Wally Kurth) on blast letting him know if he is planning on a hostile takeover, he will have his hands full. He will not allow that to happen. Michael suggests that he tread very carefully or there could be trouble ahead.  Will Ned listen to Michael or continue with his plan?

Other General Hospital spoilers indicate that Valentin has been working hard to convince Nina to give him another chance. He knows that Nina adores his daughter Charlotte (Scarlett Fernandez) so he uses her to get Nina to agree to go out with him.  He arranges something special for her. Nina tells him that she will give him the answer to a question during dinner. She added, “Meet me for dinner, and you’ll get my answer. Take it or leave it.”

Nina asks Dillon to fly to Morocco, and he let Kiki know if he is going.  By the look on his face and Kiki’s expression, it seemed like he told her he would go. GH fans assume this may be the start of Robert Palmer Watkins exit storyline.

Julian receives the verdict, and it is a shocker.  The word on social media is that he will be found not guilty. After Julian testified on Thursday’s show, he thought he had come across as genuine and honest. His attorney, Scott disagrees. He worries that Julian could be facing a guilty verdict.

William deVry will have a short leave from General Hospital. So, it is likely, he will be found guilty. Don’t worry though, Julian will be back on the canvas in the fall.

General Hospital fans, do you think Nina should get back together with Valentin?  How do you feel about Julian’s verdict?  Share your thoughts in the comments below and check back with Soap Opera Spy for more GH spoilers right here.