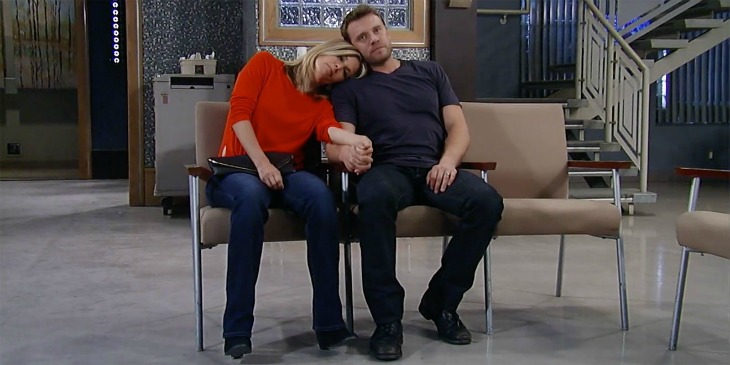 Monday’s July 31 episode of General Hospital begins with Jason (Billy Miller) sitting alone talking to himself while Sam (Kelly Monaco) is out of the room for tests. Jason is concerned about Sam’s health and fears being married to just a memory.

Finn (Michael Easton) is nervous waiting for Sam’s test results. Griffin (Matt Cohen) tells Finn to take a break and mentions Sam’s coma as Jason walks up. Finn gets a text from Hayden and leaves.

Jason tells Griffin how Sam is a fighter but needs his help. Griffin explains the longer Sam is in the coma the higher the chance for complications. Griffin suggests he go home to rest but Jason refuses.

Jared tells Dr. Obrecht (Kathleen Gati) he’s leaving town and wants nothing to do with Hayden/Rachel. Dr. Obrecht hands him papers with information. Jared is cutting his loses with Hayden and leaves. 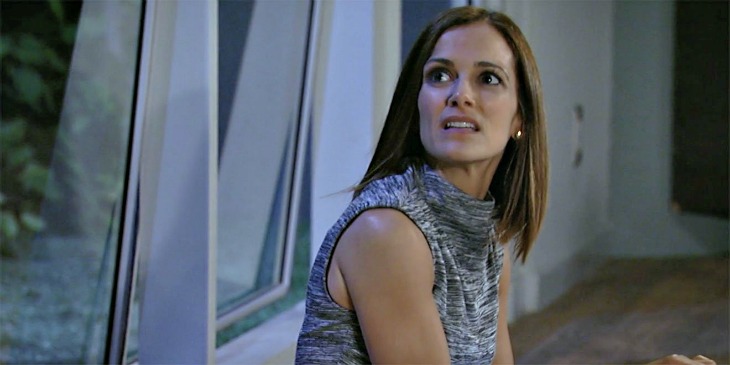 Hayden (Rebecca Budig) at the new house touching her baby bump saying she’s ready for this life with Finn and the baby. Finn arrives and tells Hayden about Sam. Finn watching Jason brings back memories when he lost his wife. Hayden hugs Finn reassuring him her and the baby are fine.

Finn asks why she hates the tennis courts so much. Hayden explains it’s reminds her of her ex-husband Jared. Hayden mentions how Liz mentioned marriage with Finn. Finn leaves to get food to celebrate their engagement. Hayden sits back down on the floor and the door opens. She starts to ask what he forgot and but its Jared, not Finn.

Nina (Michelle Stafford) tells Nathan (Ryan Paevey) she’s disappointed in him for giving up on her. Nathan doesn’t want to see her get hurt again. Nina starts to leave to get her bail money back when Valentin (James Patrick Stuart) walks in asking if he’s still the prime suspect. Nathan hopes Spencer takes Valentin for all he’s worth.

Dante calls Nathan. Nathan tells Valentin and Nina they know who took Spencer (Nicolas Bechtel). Valentin demands a public apology. Valentin tells Nina her faith in him wasn’t misplaced. Nina leaves. Nathan warns Valentin to stay away from his sister. Valentin if lucky enough to get Nina back will spend a lifetime making her happy.

Nina orders a drink at The Floating Rib and sits beside Dr. Obrecht. Dr O tells Nina some people are too scared to go after what they want or demand what’s right for them. Nina thanks her and leaves. Later Nina tells Valentin she got the bail money and he isn’t indebted to her. Valentin replies he’ll always be indebted to her. Nina kisses him. He asks her to come back to him so they can be a family again. Nina backs away slowly and leaves.

Carly (Laura Wright) tells Dante (Dominic Zamprogna) that Sonny (Maurice Benard) is alive and Garvey  knows where he is. Dante yells to Garvey about Sonny’s location. The doctors take Garvey to a patient room. Liz (Rebecca Herbst) tells Dante she noticed a white car while in the parking garage. Liz thanks Carly for her help and leaves. PCPD cop brings evidence of Spencer being in Garvey’s car. Carly tells Dante that Sonny made sure he’s untraceable so he could fly under the radar. Dante leaves.

Carly tells Jason she knows Sonny is alive and believes Sam will be fine. Jason leaves to talk to Griffin. Liz tells Carly that Garvey is out of surgery and on the tenth floor. Carly walks in Garvey’s room. She starts messing with his morphine drip and asks where her husband is.

Sonny in the bottom of the pit complaining it’s difficult to breathe. Sonny does a confession and recites The Lord’s Prayer. Sonny has a vision of a man approaching him. Sonny looks up smiling saying: “Oh it’s you”.

The Young and the Restless Spoilers: Jordan’s Idea is Dangerous – Chelsea Shouldn’t Give Hilary the Cold Shoulder