General Hospital POLL: Who Was Your Favorite New Couple of 2017? 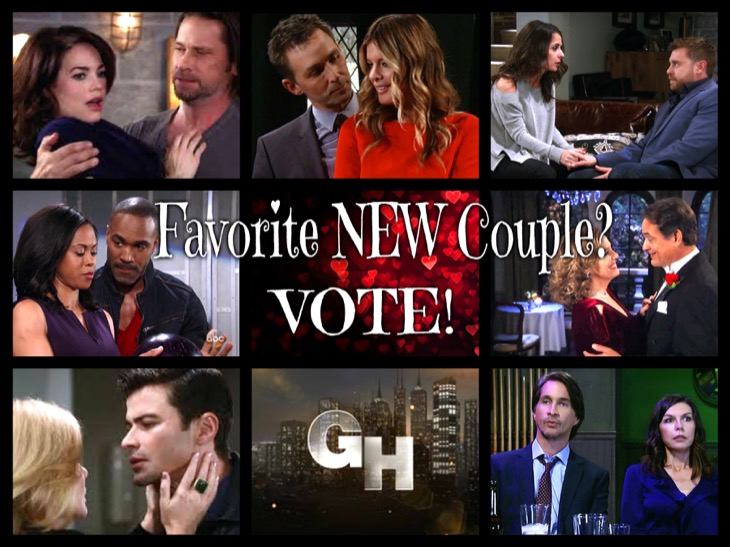 General Hospital Spoilers tease that 2017 seems to be the year for lovers; the year of romance and love even among strange bedfellows. Who is your favorite new couple of 2017? Please vote and let us know.

Nina Reeves (Michelle Stafford) and Valentin Cassadine (James Patrick Stuart) married on New Year’s Eve 2016 and most GH fans felt the relationship was doomed from the beginning, sure that Nina was only in it because she was obsessed with his daughter, Charlotte (Scarlett Fernandez) because she couldn’t have any children of her own. This couple has pleasantly surprised most viewers and appear to be devoted to each other, defending and protecting each other; seemingly devoted to one another.

Related: General Hospital Spoilers: Franco Tormented By His Past, Headed Down A Dark Path – Did Betsy Lie?

Super spy Anna Devane (Finola Hughes) and eccentric Dr. Hamilton Finn (Michael Easton) seem to be the oddest pair out there. Anna has never loved anyone since her beloved Duke Lavery (Ian Buchanan) was murdered and Finn seemed to be lost since Hayden Barnes (Rebecca Budig) left town, claiming to have lost their baby; but somehow they just work together. They are sarcastic and irritate each other, but completely understand each other at the same time. Could they be headed to a hot new romance?

Mob princess Ava Jerome (Maura West) and Priest-turned-Doctor Griffin Munro (Matt Cohen) have glided together as well. Griffin has always been straight-laced, chastised Sonny Corinthos (Maurice Benard) for his mob life and condemned Julian Jerome (William deVry) for his, since it was indirectly him who killed his father, Duke! How does Griffin justify his love and forgiveness for Ava, and will this last between the ill-fated lovers, especially since Ava loves to sabotage anything good in her life?

GH’s Franco Baldwin (Roger Howarth) and Elizabeth Webber (Rebecca Herbst) have been attempting to make it work for a long time. Some fans thoroughly enjoy these two together, while others can’t get past the things Franco has done in his past. They are genuinely sweet together, and Franco has a great connection with Jake (Hudson West), but will his lies and omissions catch up to him before they reach the altar?

Andrew “Drew” Cain (Billy Miller) and Sam Morgan (Kelly Monaco) have been together for a few years now, but technically he was known as “Jason”, and now that he has his own identity and has to relearn about his past; they are considered a “new couple” and this is their fresh start. Sam seems to love him for him, as she chose him even though she knew Jason was alive. Will fate intervene, or will her heart stay true to the present?

One has to wonder how many times Jordan Ashford (Vinessa Antoine) is going to be beat down by Aunt Stella (Vernee Watson) before she stops fighting for her relationship with Curtis Ashford (Donnell Turner). Jordan and Curtis have fought tooth and nail to be together; but one has to wonder, is Curtis’ auntie right? Should Curtis even entertain the idea of being with the woman who cheated on his brother?

General Hospital hit the jackpot when they put Laura Webber (Genie Francis) together with Dr. Kevin Collins (Jon Lindstrom). They have been two of GH’s fan favorites for decades and their falling in love, was so natural and nurturing. Kevin has been loving and kind to Laura, nothing like Luke Spencer (Anthony Geary) or Scott Baldwin (Kin Shriner) have ever been with her. They have been refreshing and a delight to watch, especially for long time fans who know their individual history.

General Hospital spoilers want to know who is your favorite new couple of 2017? Please vote and let us know what you think. Be sure to tune into ABC’s General Hospital (GH) to catch up on everything happening in Port Charles right now. Check Soap Opera Spy often for updates, news, rumors and spoilers!

The Young and the Restless (YR) Spoilers: Tessa Advances Career and Relationships – 2018 Will Be A Big Year