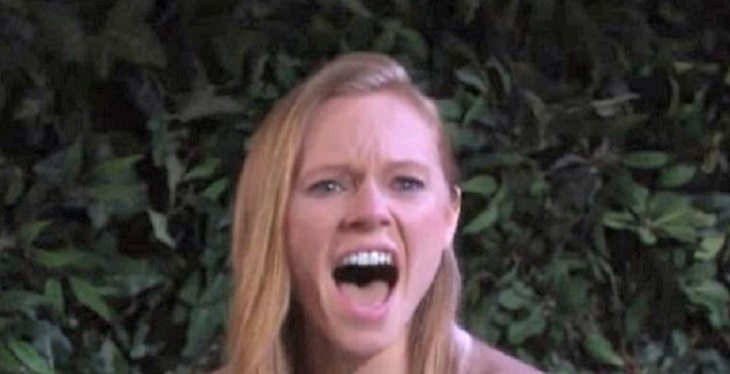 “Days of Our Lives” spoilers for Monday, July 31, tease that Abigail (Marci Miller) will take action. She just realized a speeding car was headed straight for Chad (Billy Flynn). When Chad remains paralyzed with fear, Abigail will decide she has to help him. She’ll push Chad out of the way and take a terrible hit in the process.

Chad and Dario (Jordi Vilasuso) will bend down to check on Abigail as she struggles with pain. It looks like Abigail will quickly lose consciousness. “Days of Our Lives” spoilers reveal that Abigail will be taken to the hospital for treatment. She’ll need emergency surgery to have any hope of recovery.

Dario will determine that he should stay out of all this. He’ll understand that he’s caused more than enough drama. DOOL spoilers say Dario will choose to take off and leave Abigail alone. He’s been a monster lately, but he cares about her deep down. Dario will think Abby will be in good hands with Chad. He’ll know she wouldn’t want him at the hospital anyway.

Other “Days of Our Lives” spoilers state that Marlena (Deidre Hall) and Hattie (Deidre Hall) will face off. Unfortunately, things will take a dangerous turn. Hattie will eventually gain the upper hand by drugging Marlena and taking her hostage. She has big plans, but she needs Marlena out of the picture first.

Elsewhere, Steve (Stephen Nichols) will act on his suspicions. He’s been trying to learn who framed Kayla (Mary Beth Evans), but nothing seemed to add up. However, Tripp’s odd behavior is finally starting to register. It took Steve long enough to figure this out!

Steve will soon become even more convinced that Tripp is to blame for Kayla’s problems. He’ll do whatever he can to prove it, but some shockers are coming up that could change the game. “Days” spoilers hint that Tripp’s revenge plot isn’t over just yet. Kayla will get caught in a terrifying situation later this week.

In the meantime, John (Drake Hogestyn) and Paul (Christopher Sean) will work on a new scheme. They’re hoping to clear Sonny’s (Freddie Smith) name, but they need hard evidence. Since Xander (Paul Telfer) offered a clue about Victor (John Aniston), Paul and John will follow up on it.

Their investigation could lead to some surprises. We’ll give you updates as other “Days” news and rumors emerge. Stick with DOOL and don’t forget to check Soap Opera Spy often for the latest “Days of Our Lives” spoilers, rumors, updates and more DOOL news right here.