Days of Our Lives Spoilers: Abigail Jumps In Front Of Speeding Car, Saves Chad – Hattie Stirs Up Trouble – Steve Gets a Clue 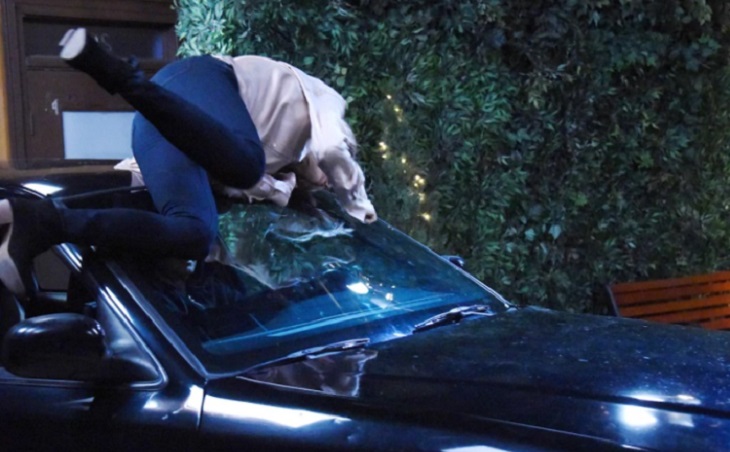 “Days of Our Lives” spoilers for Friday, July 28, tease that Chad (Billy Flynn) will try to figure out why Abigail (Marci Miller) agreed to walk away from her son again. Abby told Dario (Jordi Vilasuso) she would enter the witness protection program, but she’s holding out hope that Andre (Thaao Penghlis) can delete the evidence. Nevertheless, Abigail is willing to leave forever if that’s what it takes.

DOOL fans know that Abigail adores Thomas, but she just can’t let Dario send Chad to prison. When Chad questions Abigail, she’ll do her best to explain. Abby will urge Chad to take care of Thomas and live a good life. She’ll insist that her departure is necessary if they’re going to have any kind of peace.

Chad won’t understand why Abigail would make such a rash decision. He’ll push her to reveal the real reason she’s moving away with Dario. “Days of Our Lives” spoilers say Abigail will finally blurt out that she’s doing this for Chad. She’ll promise that she only wants to help him.

Dario will tell Chad to butt out, but he’ll only add to Chad’s rage. “Days” spoilers state that Chad will shove Dario as he hurls insults. Dario will do the same and their argument will quickly escalate. Suddenly, a car will speed straight toward Chad. Abigail will worry that Chad is going to take a serious hit.

When Chad doesn’t respond to her cries, Abigail will be forced to think fast. “Days of Our Lives” spoilers say Abby will push Chad out of the way, but she’ll take the blow instead. Abigail will soon be in a fight for her life!

In the meantime, Marlena (Deidre Hall) will face some trouble of her own. Hattie (Deidre Hall) will make a move that leaves Marlena wondering what to do. “Days” spoilers indicate that Marlena will kidnap Hattie at some point, so maybe an opportunity will pop up on Friday.

Elsewhere, Joey (James Lastovic) will seek guidance from Roman (Josh Taylor). He’ll open up about his problems and Roman will deliver a few words of wisdom. Across town, Steve (Stephen Nichols) will discover something that could lead to a break in his investigation. DOOL spoilers hint that some suspicions could emerge about Tripp (Lucas Adams).

It sounds like some exciting moments are in the works. We’ll give you updates as other news and rumors come in. Stick with the NBC soap and don’t forget to check Soap Opera Spy often for the latest “Days of Our Lives” spoilers, rumors, updates and more DOOL news right here.