Days of Our Lives (DOOL) Spoilers: Susan Tells Will Horton He Married Sami Brady – And That’s Not All! 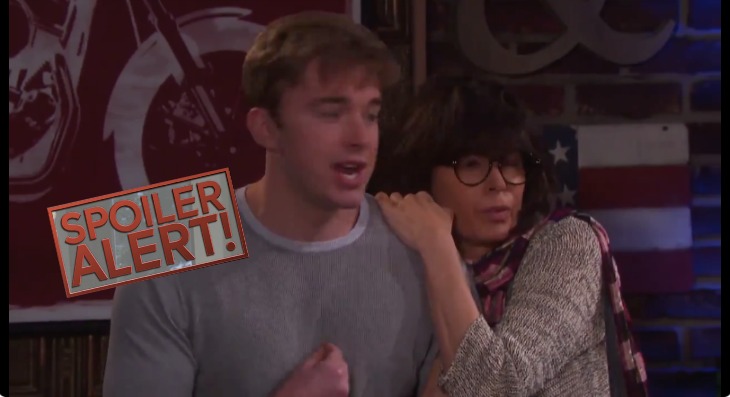 Days of Our Lives (DOOL) spoilers for November sweeps are intense, shocking and unbelievable. The Will Horton (Chandler Massey) storyline is taking a wickedly warped turn. For one, Will believes that Susan is his mom, and Sami Brady (Alison Sweeney) was his wife! However, that isn’t the only shocker. Things just get more twisted.

Eileen Davidson’s dual roles, the multiple references of EJ DiMera (formerly James Scott) and the Will Horton mystery are all connected. However, nobody could have predicted how everything ties in together.

Days of Our Lives spoilers for November sweeps reveal that Kristen DiMera is pretending to be Susan Banks. As she throws the wig off, Kristen tosses her head up and wickedly cackles, pleased with her scandalous scheme. It seems that the crazy fan theory of Kristen impersonating Susan was correct.

Furthermore, Will is convinced that he is EJ DiMera. Susan tells fake “EJ” that he was married to Sami. Yes, it is a sick, sick scheme. Things possibly couldn’t get more twisted… or could they?

Alison Sweeney’s character is absolutely devastated and resorts to desperate measures. She takes Ben Weston (Robert Scott Wilson) hostage. She is going to force him to fix Will Horton. She believes it is the only way to give her son his memories back. It is a crazy scene and despite him calling Sami “sick”, Ben will end up doing the deed.

Days of Our Lives spoilers show Ben cornering Will. He is holding a syringe that looks like it is filled with the resurrection substance. Could Sami want Ben to kill Will, then bring him back again? Is that the only way to reverse the damage fake Susan (remember, it’s really Kristen) has caused?

LOVE DOOL?  MAKE SURE TO SUBSCRIBE TO OUR DAYS OF OUR LIVES NEWSLETTER, HERE!

This is just speculation based on the promo. However, head writer Ron Carlivati is really pushing the envelope. Anything is possible, and he isn’t afraid of going to extremes. Days has never been like this, so get prepared as the ultimate shockers are revealed later this month.

November is going to be hot, hot, HOT in Salem! #DAYS pic.twitter.com/3sR1Z6G9Me

The Bold and the Beautiful POLL: What Do You Think Of A Bill and Steffy Hookup?