Coronation Street Spoilers: Eva And Adam Team Up For Ultimate Revenge On Aidan! 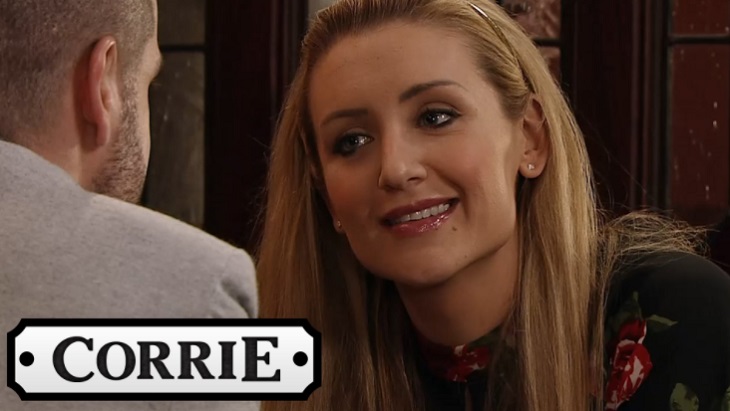 As Eva (Catherine Tyldesley) and Adam (Sam Robertson) set about fleecing love rat Aidan (Shayne Ward) for all he’s worth on “Coronation Street,” will the two co-conspirators actually fall in love?

Poor Aiden is in dire straits and he doesn’t even know it! His girlfriend Eva has found out about his ongoing fling with Maria (Samia Ghadie), and she’s dead-set on making the cheat pay for his wayward ways. First off, Eva decides to tell him that she’s pregnant, then her sister gets in on the act, adding her support to Eva’s plan of destruction.

But can sweet Eva really go through with the dastardly plan of action? Just when it appears that she may fold like a house of cards, someone comes along with the potential to rock Eva’s world.

In the upcoming days, Corrie spoilers tease that Adam himself will try and exploit Aidan. The bold man tells the love cheat that he’ll expose the sordid affair with Maria if he doesn’t pay up big time. Who knew that Aidan would take the high road and refuse the unscrupulous offer?

In response Adam will try to get Aidan to tell the truth instead, but that would wreak Eva’s plot! So the quick-thinking woman lets Adam in on her plan somewhat, telling him to back off because she’s pregnant and just wants the drama to die down.

Coronation Street Spoilers: Peter’s Past Comes Knocking – No Happy Ever After For Toyah?

A sympathetic Adam agrees, but does he have a more nefarious scheme in mind? Eventually viewers will see Adam and Eva team up to take on Aidan, but who is playing who? Watch out Eva!

What will happen when forthright Adam tells Eva that they should team up to take Aiden’s factory away from him? Suffice it to say that Aiden never should have incurred Eva’s wrath!

Aidan is on the brink of losing everything, all because of his dalliance with the lovely Maria. But will Adam and Eva twist the knife further by taking their relationship to the next level? Expect Aidan to react with a shocking response when he finds out that he’s been conned, fleeced, and two-timed!

The Young And The Restless Spoilers: Nikki and Jack Share A Kiss, Sparks Fly – The End Of Niktor?