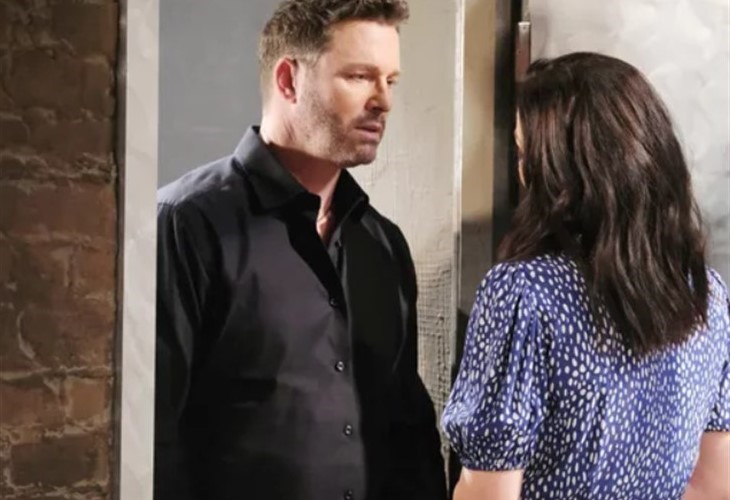 DOOL spoilers reveal that after Jake was booted out of DiMera Enterprises, Gabi came up with another plan. Gabi and Jake set their sights on Titan, but they weren’t interested in a business partnership or employment. The devious duo plan on taking over Philip’s position as CEO. However, they almost got caught and it’s only because of Jake’s quick thinking that Philip believed Brady was behind the keylogger and not Gabi.

After Jake saved the day, Gabi had to come up with an idea on how to use Brady and Philip’s rivalry to their advantage. That’s when Jake and Gabi met with Brady to talk about their concerns about Philip. Of course, the concern wasn’t genuine, but a scheme to get Brady to talk to Victor about why Philip needed to be removed from the CEO position at Titan.

Days of Our Lives spoilers reveal that Brady fell for the bait and he does go to talk to Victor. Brady tells his grandfather about the lengths that Philip is going to due to his jealousy. At some point, Philip’s unsent email threat to Brady will come into play. This is something Victor will be worried about, but will he really remove Philip as CEO?

Victor will not fire Philip and put Jake and Gabi in charge. Victor might accept that they are working for Titan now, but he absolutely wouldn’t trust his company in their hands. If Philip is going to be removed, then Victor will probably put another family member in charge.

During the week of September 27, Brady will realize that Jake and Gabi might have ulterior motives. Now, Brady doesn’t know Jake very well. However, Brady and Gabi have schemed together in the past. When Gabi was trying to get revenge on Stefan DiMera (Brandon Barash) — before ‘Stabi’ got together — Brady was actually in on that plan. However, Brady also warned Gabi of the possible consequences of her plan. So, it’s only a matter of time before Brady realizes that Jake and Gabi are using his rivalry in order to get Philip out of the driver’s seat at Titan.

Days Of Our Lives Spoilers – Victor Kiriakis Strikes Back

This could play out in a few different ways. Brady and Philip could put their rivalry aside for a few minutes in order to work together. After all, they both want the same thing — to protect Victor’s company. Despite Brady working for the competition, he doesn’t want anything bad happening to his grandfather or his company. Brady also doesn’t appreciate being played by Jake and Gabi.

The other possibility is that Victor already knows exactly what’s going on. Victor could decide to play the game, but he’s on a completely different level than “Jabriella.” Victor could put Brady in charge at Titan after removing Philip just to throw a wrench in Jake and Gabi’s plans. Or, he might bring back Xander Cook (Paul Telfer). In any case, there is no way Victor is going to put his company in the hands of the enemy.