‘Days Of Our Lives’ Spoilers: Deimos Suspicious Of Chloe’s Pregnancy, Doubts Philip Is Father – Hires Dario To Find Out Truth 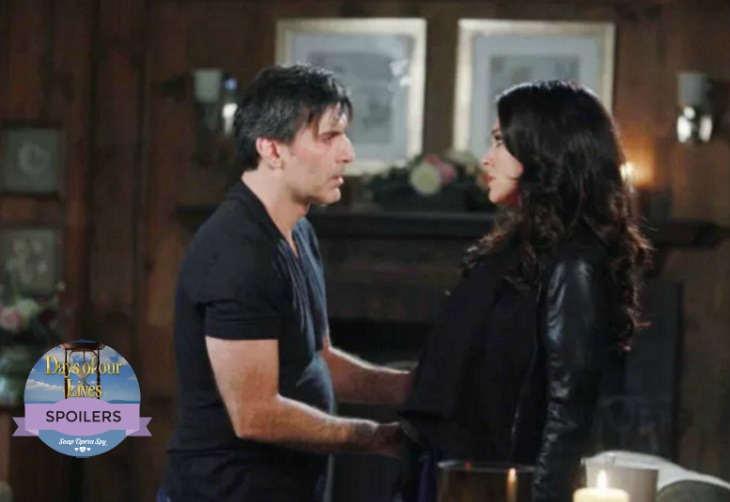 Days Of Our Lives’ Philip (John-Paul Lavoisier) and Chloe (Nadia Bjorlin) have agreed to pass her baby off as Philip’s instead of telling Deimos (Vincent Irizarry) the truth about who the baby’s father is. She doesn’t want Deimos to know that he is the father of her baby. Secrets don’t stay hidden long in Salem, so Chloe’s scheme will not be a secret for long. Philip and Chloe go to Kate (Lauren Koslow) and tell her the news about the baby. If they wanted to keep it a secret, this is not the move they should have made.

Kate rushes to tell Deimos about the good news. She tells Deimos that Chloe is pregnant with Philip’s baby. Deimos does the math and realizes that something is suspicious with her pregnancy. When Deimos was going by the name Robert, Chloe talked about Philip, but never indicated that they were together recently. When Deimos and Chloe reunited, she didn’t tell him anything about being involved with Philip.

Deimos isn’t going to let Chloe’s pregnancy drop. He decides to have her followed so he can keep an eye on her. He decides to hire Dario (Jordi Vilasuso) to follow her around. Deimos wants to find out what is really going on with Chloe and the baby. Will Deimos find out the truth about Chloe’s baby? Will he find out that Nicole knew the truth, but didn’t tell him?  Let us know what you think in the comments below and don’t forget to check Soap Opera Spy for all of your DOOL spoilers and news!

‘The Young And The Restless’ Spoilers: Possible Chloe And Billy Reunion In The Works If Billy Is Bella’s Father?

‘General Hospital’ News: Emme Rylan Out Of Surgery – Reveals Her Broken Nose Is On The Mend

Days of Our Lives Spoilers Friday, January 17: Xander Makes Demands Of Ciara – Will…