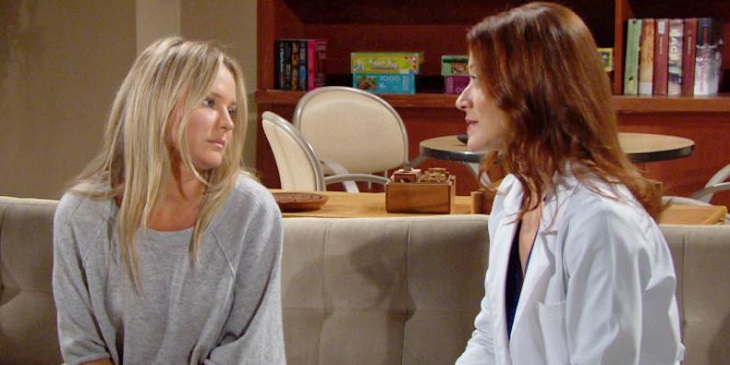 “The Young and the Restless” (Y&R) spoilers tease that Sharon Newman (Sharon Case) may finally be onto Dr. Anderson (Emily Bogush) and will discover something shocking that reveals all is not as it should be at Fairview. Sharon will fight back on Friday, November 6 – but it may be too late for Sharon to save herself.

Sharon could discover Dr. Anderson’s true identity – rumors are circulating that she is the mysterious teenager Sandra Allen who broke her neck diving into the Newman pool one summer. Additional speculation is that Dr. A is in cahoots with a doctor inside the hospital where Nick Newman (Joshua Morrow) and Sage Newman’s (Kelly Sullivan) son Christian is fighting for his life. Dr. Anderson – no one is sure she’s really even a doctor – may have manipulated the other doctor into declaring baby Christian dead even though he is very much alive. Dr. A will then give Christian to Sharon and convince her – it won’t be difficult considering the condition she is in – that the baby boy is her newborn son.

She could reach out to her son Noah Newman (Robert Adamson) or to Dylan only to discover that Nick and Sage’s baby “died” and realize the baby boy is not hers but Nick’s – and that Dr. Anderson has been drugging her and lying to her the entire time. Will it be a race against time for Sharon Newman to not only save herself but to safe Nick and Sage Newman’s ailing baby?

No one knows anything about Dr. Anderson but thankfully Dylan has consulted with Dr. Neville (Michael E. Knight). Perhaps once Sharon’s medical care has been taken out of Dr. A’s hands then all will be revealed and Sharon and Dylan, as well as Nick and Sage, will get the answers they deserve…before it’s too late.